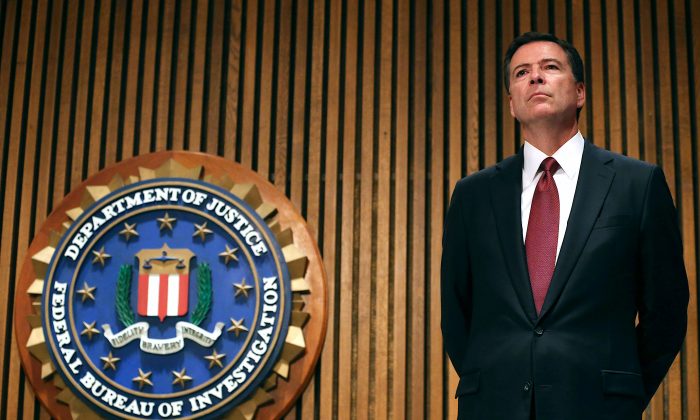 Investigative journalist Lee Smith says the story of the origins of the FBI investigation into Trump campaign aides can be likened to the Watergate scandal, in the sense that it was a break-in—an electronic one—to rummage through the campaign’s communications.

“If you think about it in terms of Watergate, it’s easy to understand,” he told Epoch Times senior editor Jan Jekielek on the Nov. 4 episode of “American Thought Leaders.”

“It was an electronic break-in. The Clinton campaign wanted to find an October surprise to dump on Donald Trump.”

Smith, a senior fellow at the conservative Hudson Institute, recently released a book, “The Plot Against the President,” in which he lays out an argument that the presidential campaign of former Secretary of State Hillary Clinton had the FBI probe the campaign of her opponent, Donald Trump, for damaging information.

He further argues that the Obama administration ran an operation targeting Trump possibly since late 2015, long before the FBI officially opened its counterintelligence probe on July 31, 2016. After the election, he suggested, the operation switched gears and has since focused on undoing the election result.

A part of Smith’s work was to try to retrace the origins of the Steele dossier, a collection of unsubstantiated claims that the Trump campaign colluded with Russia to sway the election.

No such collusion has been substantiated after nearly three years and multiple investigations.

The dossier is commonly believed to have been created by former British spy Christopher Steele, who was paid for the job, through intermediaries, by the Clinton campaign and the Democratic National Committee (DNC).

The dossier was used by the FBI to obtain a FISA spying warrant on former Trump campaign aide Carter Page—an event subject to a Justice Department’s review that has reportedly turned into a criminal investigation.

Smith believes that the dossier wasn’t actually written by Steele, but that it was a collective effort on behalf of the Clinton campaign to write a document for the express purpose of enabling spying on the Trump team.

“We have the order wrong, right? It starts with people who know how to write something, how to write a document to get a spy warrant,” he said. “It’s not like it comes out of the blue from Christopher Steele, who’s finding all this marvelous stuff and has to go to the FBI. It’s the other way around.”

In Smith’s view, Steele was a “salesman” of sorts, whose job was to use whatever reputation he had from his previous work with the FBI to market the dossier to the bureau as well as the press. Smith further suggested that the FBI itself may have had a role in composing the dossier.

He gave the example of Vyacheslav Trubnikov, a former director of Russian intelligence, who was allegedly one of Steele’s sources.

Trubnikov was, in fact, a source for Stefan Halper, a Cambridge professor who was de facto outed as an FBI informer used to snoop on Trump campaign aides.

Halper listed Trubnikov as a source for a document he prepared for a secretive Defense Department think tank in 2015–2016. He also invited Trubnikov to teach at the Cambridge Intelligence Seminar (CIS) at least twice—in 2012 and in 2015—and Trubnikov obliged him both times, according to a defamation lawsuit filed against Halper by former CIS participant Svetlana Lohkova.

Lohkova, a UK-based historian of Russian origin, alleged that Halper fed lies to the media that led to the public gaining a misimpression that she had approached former Trump adviser Lt. Gen. Michael Flynn and engaged him in a relationship, or possibly an affair, on behalf of Russian intelligence.

It was a major part of the anti-Trump operation, according to Smith, to paint Flynn, a three-decade Army veteran and former head of the Defense Intelligence Agency, as compromised by Russia.

The main reason was that Flynn talked about reforming U.S. intelligence, Smith said.

“Gen. Flynn wanted to find out what the intelligence community was doing: To what extent it was serving the American people and to what extent it was filling their own wallets and entertaining their own political desires and fantasies, how they wanted to see the bureaucracy shape up on behalf of their interests, not on behalf of the American people.”

Flynn went as far as entertaining an audit of the intelligence community.

“Flynn was talking about asking the senior intelligence service, hundreds of people across the beltway, for their resignations,” Smith said.

That doesn’t necessarily mean the officials would have been fired, he said, “but they were going to have to justify what they were doing, and many of them wouldn’t have made the cut.”

Flynn was one of the Trump aides probed by the FBI for an alleged relationship with Russia.

He pleaded guilty on Nov. 30, 2017, to one count of lying to the FBI, but recently went on a legal offensive and expects to file a motion asking a federal judge to dismiss the case against him, his lawyer, Sidney Powell, said in a recent court filing.

Powell accused the government of withholding exculpatory information from Flynn and lacking a proper reason to investigate Flynn in the first place. The prosecutors disagreed.

Smith portrayed much of the legacy media as complicit in the operation, even indispensable to it.

By subscribing to what Smith called a “conspiracy theory” of Trump–Russia collusion, the legacy media has caused “serious” damage to its credibility and its survival.

“It’s an extinction-level event,” he said.